They entered the church; they preached benaeth the spreading oak and
in the crowded street, filled the rural chapel and occupied the city pulpit;
visited regions no white man's foot had ever trod to plant the banner of the
cross, and today are in far-away lands pointing the natives to Jesus.
They learned the healing art and became skilled surgeons and physicians.
They entered the courts, plead at the bar, and sat upon the bench.  They
They entered legislative halls, and assisted in framing the laws.
They were truepatriots.  Scan the muster rolls of the Republic, and
you will discover when our country called for men, they were found
at the front.  They fell by the arrow of the red man, and felt the
keen edge of his tommyhawk and scalping knife.  Scores of them were
found in the Revolutionary army.  They followed the flag to Mexico
and Cuba.  They fell upon the battlefields of Virginia.  Some of
them tramped after McClelland and Grant, and some followed Jackson
and Lee, as their forefathers had followed Washington and Lee. Side
by side they rest, life's last conflict ended.  They sleep beneath
the lilies and poppies in France and Flanders.
In France there were many Christians who did not accept the teachings
of the Roman Church, and declined to be absorbed by it. Living years before
John Huss and Martin Luther, they drew up articles of faith far more drastic
and strigent than those subsequently formulated by the sixteenth century
reformers.  Judge Savery says: " The name ( Bumpas ) is well and favorably
known in the legal annals of the past and present generation in England. "
Documents reveal the fact that among the descendants of Edward, the name
soon appeared abbreviated forms as Bump, losing something of its euphony.

There are certain physical characteristics found in this family.
They are a long-lived race.  The Pilgrim was past ninety and numerous
descendants of his,  not content with the allotted three score and ten,
persist in living on to eighty,  ninety, nearly approaching the century
line.   They produce super-men,  attaining six feet in height,  six two,
four,  six,  and above.   They are heavyweights,  tipping the scales at
two hundred,  three hundred,  three twenty and beyond.   While large,
they have been alert,  active,  possessing powers of strength and
endurance.  Many of the women have been noted for physical perfection
and beauty.

There is a possibility that Hannah, who became the wife of Edward, was
the daughter of Anthony Annable who arrived in Plymouth on the "Annie" in
1623 ( * inserted note: This has since been disproven, Hannah's last name is
not known.  Anthony Anable's daughter married Thomas Borman Mar 3, 1645.
NOTE:   See the Annable Family in Americam 1623-1967 also Pioneers of
Massachusetts by pope.  We have only a name Hannah for Edward Bumpas'
wife. )  Edward Bumpas born in England about 1605, and died in Marshfield,
Mass., Feb 3rd, 1693.  Having lived in New England 72 years, Hannah his
wife died 12 days later.  In 1627 Edward bought land in 7 moved to Duxbury.
He built a house and palisado at Eagles Nest Creek, near Miles Standish and
Elder Brewster.  Later he purchased land in the Northern part of the town
near Philip Delano and John Alden.  In 1640 his land became a part of the
newly founded Town of Marshfield where he was a Freeman in 1643. In that
year it is indicated he was one of the twelve who contributed toward the
maintenance of a public school, the first in the New England Colonies.
Edward and Hannah reared a large family.  Their first two children,
Faith and Sarah, both in 1631, are thought to be twins.
The Mayflower came to our shores shortly before Christmas-, 1620.
Just before Thanksgiving, the following year came " The Good Ship Fortune, "
bringing Edward Bumpas.  He settled amongst the Mayflower people, and
his decendants and theirs intermarried, and soon the name appears in the
list of Mayflower descendants.  Within the century we find his grandchildren
and great-grandchildren domiciled in North Carolina and Virginia.  Their
children moved out to the West and South, until today they are scattered
over the face of the earth.

And who were the decendants of Edward Bumpas ?
They were the pioneers; they went before and opened the way.  They
hewed down the primeval forests, built the rude palisado, and tilled the soil
They were familiar with the plow, the hammer, the saw, the anvil and the
footlights, nor seeking the plaudits of men.
They entered the school room and taught the young.  In college they
occupied the professor's chair, and sat in the president's seat.  They edited
journals,  contributed to magazines,  published books.  They were cival
engineers, erecting factories, going into trade and commerce, developing
the material resources of the country, adding to its wealth, and becoming
caltains of industry.

In the History of Duxbury, Winsor puts down Edward Bumpas as one of
27 heads of families who arrived at Plymouth on the " Good ship Fortune "
10 Nov. 1621, and became proprietors.  At the division of land in 1623, and
of cattle in 1627, he was unmarried.  He sold land in Plymouth in 1628, and
removed to Duxbury, bought land at Eagle's nest creek, upon which he
built a house and " palisado. "  The palisado is described as a fortified
cottage, having " One large room, a bedchamber and kitchen, on the lower
floor, with two large and two small chambers above, and sometimes an attic
above all."  He sold this in 1634.  In 1640 he was of Marshfield and in 1684
was living in that he moved to Duxbury.  The record is: " Hannah, a widow
of old Edward Bumpas, died 12th of Feb. 1693," and that Edward died

nine days earlier.
Edward Bumpas, an alleged French Huguenot of about sixteen years
of age (*inserted note: It is now believed he was born in England of prob.
of French descent.) - sailed from London in " The Good Ship Fortune "
first after the Mayflower, July 1st, and arrived in Plymouth, Nov. 10, 1621.

There are strongly marked resemblance's in personal appearance. This
is particularly noticeable in groups which have been long & widely seperated.
The many pictures I have seen of the late venerable Bishop Bumpas present
a man who would look decidely at home, placed in a group of our Southern
tribe.  the portraits of some members of the Virginia and North Carolina clans
of a century ago are so much alike that they might almost be interchanged.
Their minds are cast in a similar mold.  They are persistant,  I would not
say stubborn, yet not be lightly deflected from the course they have elected.
1. Edward Bumpas ( Edouad Bompasse ) Pilgrim, was a French Huguenot.
Left France and went to England from whence he came to America.
He landed at Plymouth, Mass., Nov 10th, 1621, from " the Good Ship
Fortune "  first after the " Mayflower ".  He died Feb. 3rd, 1693.
Married Hannah, who died Feb. 12th, 1693, nine days later than Edward.
(contrary to the note above, it is believed he was born in England) 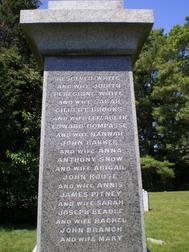 ​Edward Bumpas and some of his Descendants

Could be written by or from research of