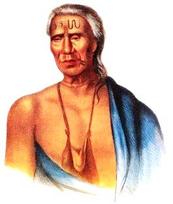 This article contains interesting facts, pictures and information about the life of the Lenape Native American Indian Tribe of the Northeast woodland cultural group.

The  picture  is  of

This area of Western Pennsylvania was in contention during the French
and Indian war, and in the years preceeding. Many captives from the eastern
settlements, were brought to native encampments and villages in this area.
Two early historical mentions include the notes of Christopher Gist, on
His 1753 journey through Pennsylvania with George Washington, and the
records of Christian Post, a Moravian Missionary employed by the colonial
government to make peace with the Delawares.
Both men mention the “ Kuskuskies “ , who were of the Delaware clan,
and numerous villages and sites have been identified as ' Kuskski '. In
relation to Slippery Rock's history, the maple sugar grove on Wolf Creek,
two miles west of the present town, is identified as the ' Kuskuski Village '
where Christopher Post signed a peace treaty with ' King Beaver ' and other
native leaders, The site once owned by * Mrs. Emma Guffy, a leader in
Democratic politics, and later deeded to Slippery Rock University.
Archaeological explorations conducted by the University have revealed
that Upper Woodland natives camped at the site for brief periods of time
for the purposes of hunting and gathering. They are not believed to have
tapped the maple trees in the grove, but did leave evidence of their pottery,
as shards have been unearthed. The site is multi – layered and is
approximately dayed 1600 to 2000 B.C.
Indian Names in Beaver County  –  By Denver L. Walton
Milestones  Vol 22. No 3 – Autumn 1997
The county has a rich Indian heritage. The Indians living in our valleys
during the historic period were here only from 1725 – 1758, but they left
us a colorful legacy of place names. Here they are, with what is known of
their origin.
( Exerpt from Vol 22. No 3 )
BEAVER – Beaver County, Beaver Borough, Beaver Falls, Big Beaver,
S. Beaver Twp., Beaver River, Little Beaver Creek; the list goes on. There
is much controversy as to the source of the name of Beaver Borough. A
state historical marker in town attributes it to ' King Beaver ' ( Tamaqui or
Amockwi ), a chief of the Delaware Indian tribe. Others claim it was named
for the beaver, for which the river and other town names were named. In the
historical Indian period, a village called ' Shingas Town ' was located here.
' Shingas ' was one of two brothers of ' King Beaver '. 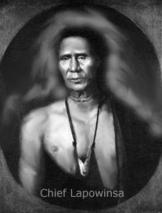