The Building to the right of
Alexander McBride Jr, is in the
original layout of the picture frame
containing Alexander McBride Sr.
and his children, along with their
spouses.
This building could be the INN or
hotel in New Castle, Pa., operated by
his older brother, David Armstrong and
his wife Elizabeth Struthers McBride.
This can not be verified.

NOTE:  Grave location with information is added only IF it can be found.

He purchased property in Harlansburg, where he

lived until his death and made home for the children

of his older brother David.
His remains lie in Plaingrove Presbyterian Cemetery,
outside of Slippery Rock, Pennsylvania.

Alexander McBride Jr was one of the ' fortyniners '

who went to California via wagon train in search of gold.
He returned shortly after the War of the Rebellion and

is reputed to have brought with him considerable gold. 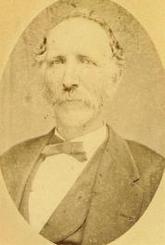 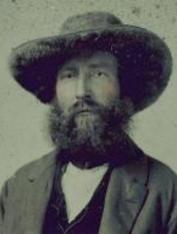 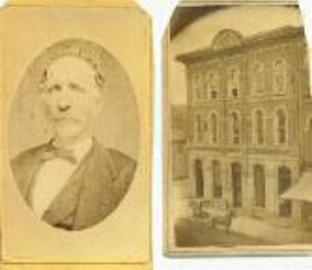