The town hall, the church, the post office, the "Mas Pams"( an old masonary which
was restored in restaurant for the elderly , schools pupils dining room ,  exposures,
football ground and Rugby ground,  athletics stadium) or the village hall are located in

the old village. Around this old village, are built residential districts made up mainly of

individual villas. There are near 7000 people in Bompas. This  "Catalan" small market

town has an economic activity based primarily on the agriculture, the horticulture,
the vine growing ( Muscat of Rivesaltes, and other sweet wines natural), the market
gardening and the craft industry. An artisanal area is being built on the left bank of the
"Têt" (river that throw in the Mediterranean ) , this is "Le Carrefour Économique de la

Salanque"(The Economic Crossroads of the Salanque plain).
.
In the Pyrénées Orientales department, Bompas is synonymous with the Snail
(Cargol in Catalan language), that was selected like village mascot.  A good gourmet
must know & especially taste the Catalane Cargolade, snails called in french langage

Pepper) roasted on a vine shoots fire.
As in the whole Pyrénées Orientales department and in a Spain area (Cataluña),
the Catalan language is amply spoken , especially by old people , who speaks the
Catalan language more easily than the French language.

In New England records of Edward and his family, I find
it written Bonpas, Bompas, Bompasse, Bompus, Bumpasse, Bumpus.

The name still occurs in its original orthography in its native land. Some
eight miles from Avignon, on the road to Aix, is a bridge spanning the river
Durance, known as Point de Bon Pas, near by a silk factory of the same name.
This was formerly a religious house built by the hermit, Silbert, In 1076,
In 1320 it became the home of the Knights Hospitaliers.  Here also is the
magnificent church erected by Simon Langham, Archbishop of Canterbury.

There is a reference to this bridge in the  " Historic Des Contes De
Toulouse  " by M. De Saint - You,  Vol. IV, page 344; (translation)  " They the
Pont de Bonpas,  and left a corps of troops sufficient to hold it and secure
the passage of the river. "  This was January,  1240, wars of Raymond VII,
Count of Toulouse.
ROBAH P. BUMPAS

I traced the Bumpas name back to the land of its origin in Southern
France,  in Provence,  the land of sunny vineyards, of music and song,  of
poetry and romance; the home of the troubadours.  Aix as its capital: sleepy
old Aix, as it appeared on a warm mid-summer's day, with its uncommonly
lovely fountain, set in a large grove of old trees in the very heart of the city;
its fine old cathedral, holding the pure, white marble statutes of its heroes
of by-gone days, looking so virile and lifelike.
Living years before the time of Martin Luther and John Huss, there were
many believers in France, who did not accept the teaching of the Roman
church and drew up articles of faith far more drastic and stringent than those
subsequently formulated by the sixteenth century reformers.   There were
the reformers.  There were two political parties in France, the Protestant and
the Protestant and the Catholic.  Sometimes one party was in the ascendant
and sometimes the other.  In those early wars our ancestors adhered to the
Protestant cause, and fought on that side.  Frequently were they subjected
to severe persecution, and when the Catholic party came into power, the
more pronounced Protestants were forced by fire and sword to seek refuge
in the Netherlands,  whence they came to Wales, England and America.
Tradition says that in January, 1240, in the wars of Raymond VII, Count
of Toulouse, a youth was handed a very important dispatch to convey from
one commander to another.  To deliver this,  it became necessary that he
pass thru the enemies' line.  It was a difficult and delicate errand, delicate
errand, demanding not courage alone, but astuteness and tact.  When, at
length, he dashed into camp & laid the dispatch at the feet of his commander
the General clapped his hands and shouted " Bon pas ! "   Bon Pas !
(a brave pass).  His comrades caught up the expression, and shouted back
" Bon pas ! "   Bon pas ! .  So on that day he received a new name, a title of
honor, conferred for valiant services rendered.
The name clung to him until he came to be known as Bon Pas, and was
father of the race Bon Pas.  In French the name is sometimes spelled as
pronounced, Bon Par. The name was Anglicized, the two words composing
it run into one, and it became Bonpas, Bompas, Bumpas, Bumpus.

Around 1153, at the place of the current Bompas village, existed only a
simple river ford , on the road from Perpignan to Narbonne, easily flooded and
thus relatively dangerous to cross. This passage was called "MAL PAS" or

MALPÀS ( Bad French Passage ).
Towards 1260, this ford having been protected, by the construction of a
bridge, it was named "BONPAS" or BOMPÀS ( Good Passage in French ).
It is thus quite naturally that the city which settled at this place named
"Bonpas", and after a few years, for the language evolves, Bompas.
We let you choose between these two explanations, but we can guarantee
to you that nowadays your life will not be threatened neither by the floods, nor
nor by the armed robbery. 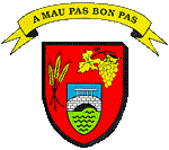 Bompas is a French village of the

area Languedoc Roussillon, in the Pyrénées-

beside Perpignan and ten kilometers of
the Mediterranean, in the Salanque plain.

Around 1153, at the place of the current Bompas village, existed only a simple
river ford, on the road from Perpignan to Narbonne, obligatory but very dangerous
passage. Many brigands benefited from this place to attack, fly and sometimes kill
kill the travelers who used this road.  This passage was called  " MAL PAS "  or
" MALPÀS " ( Bad French Passage ).
Towards 1260, this ford having been protected, by the construction of a bridge
and the presence of soldiers (perhaps the " Templiers ") it was named " BONPAS "
or " BOMPÀS "   ( Good Passage in French ).
It is thus quite naturally that the city which settled at this place was named
"Bonpas", and after a few years, with the language evolves, Bompas.