The History of David Armstrong and Sarah Harris

David Armstrong was born in Ireland in 1746, came to America with his parents, Thomas and Isavella in

what is now Fort Loudon on Lincoln Highway, at the foot of Path Valley.
( See Harris History )
He purchased 156 acres of land from his father on October 21, 1789. The deed, witnessed by James and John

Armstrong, was recorded in Chambersburg on June 17, 1790 David and Sarah sold this land on April 6, 1794.
Their address was given as Fannett township. In 1790 they, with their 5 children, George, Rebecca, Archibald

Thomas and Roland, migrated to Westmoreland County, Pennsylvania, and located near the present site of
Greensburg, where they remained until 1796. Their sixth child, Mary, was born there.

age 13, left the home east of the Allegheny

River and crossed  the country westward

through the dense forests, where only at

long distances a settler's cabin could be

west of the present  town of Slippery Rock,

Butler County , Pennsylvania , at the juntion of Wolf Creek & Slippery Rock Creek, where they commenced the settlement of a 400

NOTE:  Grave location with information is added only IF it can be found.

The forest was full of small game. One writer tells of a neighbor, Peggy Walker, being chased one evening riding home from a visit at the Armstrongs; she was startled by the terrific scream of a panther which sprang from the bushes close to the path. Her horse was frightened and ran, the panther following but
was unable to overtake the horse which was the swifter. She reached home in safety but was nearly overcome by fright.
We can scarcely visualize the primitive conditions surrounding our ancestors. They lacked nearly all the ordinary comforts of a home; they were without schools and churches; the roads were only trails through the forest, there were no bridges over the streams; the nearest store where they could procure
necessary supplies was Pittsburgh, fifty or more miles away. From tradition we learn the children met in some of the homes for private instruction. The first religious service was held under the trees near the
the present Presbyterian Church at Plain Grove early in July, 1799, by Rev. Elisha McCurdy, a missionary. At a second meeting, probably in September, a movement was made to found a church and select a site for a building which was of logs and about 20 x 30 feet in size with no floor,  puncheon seats and windows of oiled linen or of paper. The church was heated by a large open fireplace; the pulpit was in one corner on a raised platform on puncheon and was also a split log.
We should ascribe highest praise to our ancestors for their courage in establishing a civilzation under such unfavorable conditions for the record reveals that David Armstrong had a prominent place in the organizing and building of the first church in the community.

David Armstrong  was a soldier in the Revolutionary War ,  having
enlisted in the Cumberland County in 1777 under the command of Col.
James Dunlap in Capt. Noah Abraham's company. His record may be

found in Pennsylvania Archives Vol.6, Page 86. He died March 20,
1811 ; Sarah, his wife, died February 3, 1816. They are buried in the
Presbyterian Church cemetery, Plain Grove, Lawrence Co., Pa. Their
family consisted of six sons and four daughters, all married, the
following outline shows name, date of birth, death and marriage.
***   Somewhere  on  this  list  you  will  find  your  Ancestor.   *** 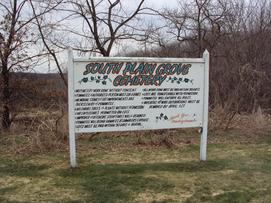 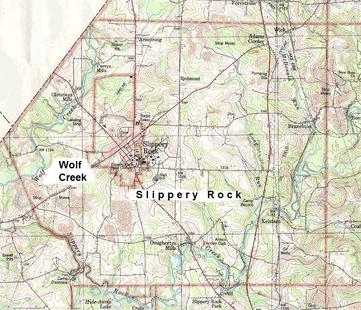 During the summer they erected a log cabin, where, in the fall, the two  children were left when the father returned to Westmoreland County. The long winter nights must have been lonesome for these two children, as there were no near neighbors, and the forests in those days were full of wild animals.  Tradition says
" the wolves came around the cabin & made the nights hideous with their angry howling."   Early in the
spring of 1796 the remainder of the family came to the new home and succeeded in holding the 400 acres. Here the four younger children were born. The family remained together 'till, the course of events ; they

were removed, the children by marriage and the parents by death. The new home was founded in an unbroken forest and was located on what had been an Indian Camping ground; in fact  the Indians were

quite numerous and were on friendly terms with the new settler's; they were frequent visitors in the home,
one writer has stated " the boys of the family particularly George mingled with the Indinas and became much attached to their customs and manner of life, and frequently joined in the chase with them."