The  History  of  the  Harris  Family  -  Yorkshire, England

We have found Armstrongs serving in prominent positions in our early
state and national history. They served because they believed in freedom and
were willing to sacrifice for it, without the blare of trumpets or the heralding to
the press agent. They served but without boasting of it. They toiled to make
better living conditions for themselves and for us, their children, not that they
might have honor of men; they had as their motto "Invectus Maneo" ( I will
remain unconquered ) this motto should be an inspiration to us to carry on
with renewed courage ever ready to suffer, if need be, for the right, so that
when we pass of the stage of action & have joined the great host whose name
we bear generations yet unborn may venerate the motto "Invectus Maneo."

SOURCE : HISTORY OF THE ARMSTRONG FAMILY 1939

When he laid out Harrisburg in 1785, he conveyed, with other property,
to the commissioners, four acres of ground on Capital Hill in trust for public
use. He also gave lot No. 185 on the corner of Chestnut and Third Streets
to the German Reformed and Lutherans in 1787 to erect a church thereon.
After a life of usefulness, he closed his eventful period on July 29, 1791
and his remains rest in peace in the Paxton churchyard, near Harrisburg.
It might be interesting to note that the route John Harris Jr., selected to
Logstown is almost identical with the national route familiar to most of us
as the William Penn Highway. Also, some of the same family later founded
the town of Harrisville, Butler County, Pennsylvania.
Roland Harris, father of Sarah Harris Armstrong, died March 1797,
whose ancestors founded Harrisburg, settled in Path Valley at the present
town of Fort Loudon in 1762. His first wife, Rebecca, Died April 4, 1772.
His 2nd wife, Elizabeth, died in 1809. The children of the first wife were
James, Richard, Hannah, and Roland. The children of his 2nd wife were
Ephriam, Joseph and Mary. Ephriam founded Harrisville, Butler Co., Pa.
In submitting this record of our family the writer is convinced that we
should not be unduly sensative over the fact that our ancestors on the
" Border " were freebooters.
History reveals that this region was practically without religious services
or character prior to the "reformation" in the 16th century. We should have
a feeling of pride and admiration that they survived the hardships and clan
wars for hundreds of years but finally were brought under the influence of
non-conforming Presbyterian Ministers and emerged as a Christian family.
One historian refers to them as a "Wonderful Race," we agree with this
estimate, they were, and still are a wonderful race; not because of their
physical strength or military prowes, but because of high moral character.
History is defined as " a record of event " but the mere recital of events
is of minor importance in the affairs of a family, a community or a Nation,
we should be and are more interested in the effort or results of events.
When we appraise the rugged characteristics of our fore-bearors we
are assured they were men and women of decisive convictions, they may
have had their faults, their failures, their crudities but we display a lack of
appreciation when we fail to recognize their greatness. They were men and
women who left their impress for good upon the communities & institutions
wherever they resided. 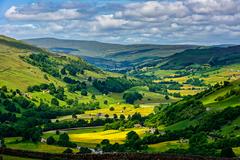 The only history of the Harris Family available,

starts with John Harris, Sr. a native of Yorkshire,
England, born in 1673. At his majority he came to

America with several brothers. He spent several
years in Philadelphia. With 1 or 2 of his brothers,

he entered the trade with the Indians in 1705.

He was married twice.  The name of his first wife is not known. She was

the mother of seven children. The second wife was Esther Say, an English

lady. Prior to 1725 he made an attempt to settle on the Susquehanna near

the present site of Brainbridge, now Paxtang, near the present city of

Harrisburg, where he established a trading post and a ferry.
He died in December 1748, and is buried with his first wife in what is now
Harris Park on the bank of the river in the city of Harrisburg. He was the first
settler west of the Conewago hills.
John Harris, Jr., was the son of John Harris, Sr., and was the first
White child born in Pennsylvania west of the Conewago hills at the present
Site of Harrisburg in 1726.
When but a young man, John Harris Jr., was occasionally employed by
the province of Pa. to transact business with the Indians at a critical period.
His house was frequented by Indians. Several important conferences
were held there between the several tribes of the Susquehanna and the Ohio
and the Government of Pennsylvania.
Prior to 1754 he had been sent on an Indian mission to Ohio, and at the
same time to notice the most practicable route from his ferry (Harris' ferry) to
Logstown (now known as Ambridge), below the area which is now the city of
Pittsburgh. Having accepted an Indian agency, he was faithful to his charge,
both to the Indians and to the Government. The latter he kept constantly
informed of what was going on in the frontier settlements, at this time many
Of the Indians on the Ohio had taken up the hatchet against the English.
He was a great patriot. When the independence was agitated, he thought the
declaration premature, but when independence was declared, He advanced
three thousand pounds to carry on the contest. He was a man of more than

before he had laid out Harrisburg, he observed to Judge Hallenback that this