Why was this particular rock, among all of the slippery rocks along the 49 miles of the stream in Butler

and Lawrence counties, so note worthy For one reason, according to the 1874 geological report, there was

a natural oil seep at the location (the Slippery Rock oil field was eventually developed because of this seep).

Also, an Indian path from present- day Pittsburgh to present - day New Castle crossed the creek in this area.

Possibly, this particular rock was located where the path forded the stream. Indeed, the " SLIPPERY ROCK ,

"  as located in the 1864 map  ,  is a flat piece of sand  stone extending into the stream from a very steep

bank. It is quite possible that an early path, now obscured, crossed there. If so, then this rock, excessively

slippery because it was coated with oil, was located at a ford on a well traveled path, where travelers

probably had little choice but to cross it.

It may never be known if this is really  " The Slippery Rock , " or if this is how it received its name,

but this rock is as likely as any other rock to be " The Slippery Rock."

This single rock is potentially the source for the name of a stream, a town, a university, on oil field,

an oil sand from which the oil field produces, and a period of glaciation. And how many other single

rocks are mentioned weekly on National television during the football season ? 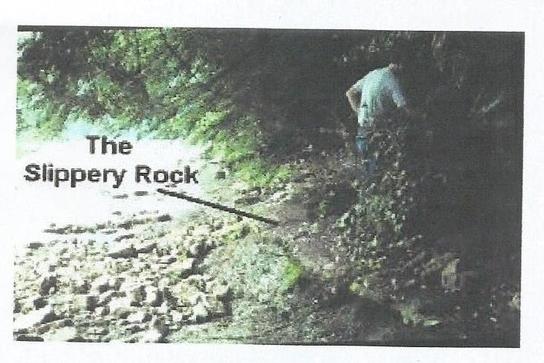 and published in Pennsylvania Geology in 1974. Bill Lytle was geologist with the Bureau

of Topographic & Geologic Survey for 34 years.  Pennsylvania Geology is a free quarterly

publication of the Bureau of Topographic and Geologic Survey. )

Is there really a slippery rock ?

The fame of the Slippery Rock football team, the Rockets, dates back to 1936, when a playful sports writer

"proved" that this team deserved the title of Best in the Nation.  The Rockets beat Westminster 14 – 0, which
beat West Virginia Weslyan 7 - 6, which beat Dequesne 2 – 0, which in turn beat Pittsburgh 7- 0, which beat

football scores are broadcast across the nation has been . . .

Since as far back as the 1700's, the stream has been referred to By the Delaware Indians, the french, the

british, the Americans as " The Slippery Rock " or " Flat Rock "  -  always in the singular.  But is there really

one special rock , and if there is , where might it be located ? A map prepared in 1864, and published by the

probably came from old timers in the area talked to geologists of the second survey.