Barnstable County was formed on 2 June 1685 when Plymouth Colony
was divided into three counties.  The county seat is the Town of Barnstable.
Bristol and Plymouth counties were also named after their county seats. 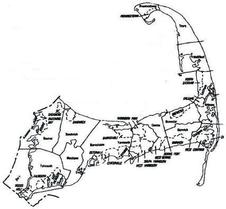 Locations  of  our  Ancestors