The names McBride, Kilbride come from the Gaelic Giolla Bhride,

' Devotee of the cult of st. Bridget is one of the three patrons

*    of Ireland. Her cult was initially of the Irish midlands where
it was confined to the Counties of Kildare, Offaly and Roscommon.
Her great schrine was at Kildare where there are still monstic remains.
In Donegal it appears there was another St. Brigid whose father's
name was Dubthach,  was the same as the great  St. Brigid's.  Her
Centre was Ray, near Falcarragh. The Erenaghs there were for centuries
*    MacGiolla Bhride.  It is unlikely that this  St. Brigid  cult could have
competed with that of St. Columbkille were it not for the Kildare Saint's
name. While it is not likely that the McBrides are decendants of the
*   Erenaghs, the many cult followers would have given the name to their
children. The name McBride is well attested today from Carrigart to
*  Dungloe, the presumed spread of the original Donegal cult of nearly a
thousand years ago.
McLsaght refers to the 1659 census of County Down & finds McBride
*   the principal name there. This would be consistent with an active cult
*   from  the ninth century. The cult was extensive in Scotland also and it is
impossible now to distinguish the local names from those which might
have been brought into North of Ireland by newcomers. In Scotland the
forms Kilbride, Bridge(s) and others were also commonly adopted.

This surname History is reproduced with kind permission of Irish Roots Magazine
in which it was first published as part of the feature article, Surnames of County
Donegal, in issue 2, 1995. Published by: Belgrave Publications - Year written: 1995 -
Copyright owned by: Belgrave Pulications 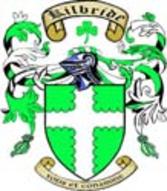