Virginia Lytle, an alumna of the college, and a wife of William Lytle,
division Chief of the Oil and Gas Division of the Pennsylvania Geological
Survey Staff, described her inquiry about and visit to " The Slippery Rock "
in a  report published Nov. 11, 1973 in the Pittsburgh Press Rote, and
reprinted in the 1974 issue of Pennsylvania Geology.
Armed with the  100 - year - old - map ( which Lytle also made
available to the Eagle ),  the couple drove to Wurtemburg in Lawrence
County and walked to " the tangle of cliff & brush that lined the eastern
bank of the creek just below the map location of the Slippery Rock.
Hike Delayed - Because it was spring, John Eicholtz, owner of the
house on the east side of the creek just south of the rock's location ,
told them high water would make walking too slippery, & recommended
that they come back in September. In this interval, they researched
historical records, noting that recurrently the singular , Slippey Rock,
was used indicating that there was one, special rock.
Mrs. Lytle, suggests that the rock, as designated may have been at
the site of a *ford used by foot travelers and horseback riders.  The flat
rock, even though it was slippery, would have provided a logical *fording
place. She further suggests that the building of bridges lessened the
importance of *fording sites, and the location may have been lost with
the passing of time.
In September, the Lytles returned to " The Slippery Rock site, and
with Eicholtz as their guide, made their way along the gently sloping
stream bank.  The east wall of the gorge, she notes,  rises abruptly a
few feet beyond the shoreline.

* ford  ;  * fording  = A ford is a shallow place with good footing where a river
or stream may be crossed by wading or in a vehicle. A ford is mostly a natural
phenomenon, incontrast to a low water crossing, which is an artificial bridge
that allows crossing a river or stream when water is low.
(From Wikipedia, the free encyclopedia)

' The Slippery Rock' - " the main difference in the terrain when we
reach the rock is to my untrained eye," she writes, " that instead of
hopping from slippery stone to slippery stone, we are standing now on
one flat,  gently sloping,  moist rock.  It is covered ( as are the smaller
stones )  with algae and moss - that glistens with an oil - appearing
iridescence. The sloping rock had been resistent to the rushing force of
the stream and now provided the creek with a deceptively almost - level
bank and bed.
The exposed portion of the solid rock extends along the edge of the
creek for at least 25 feet. The dampness that covers the rock comes from
a trickle of water seeping from between the strata of shale & coal along
the wall of the gorge. For the length of the exposed slippery rock there
is no dry bank to walk on -- just the creek, moist -- sloping, slippery rock,
and the gorge.
Although no oil was seen seeping out of the sandstone, none was
expected, since the gas pressure, which had been forcing the oil out
was depleted long ago by the oil wells.
Lesley, whose map and profile of a line of levels along Slippery Rock
Creek is appended to the Second Geological Survey, was state geologist
in 1874, when the report was published. He says " The Slippery Rock,
which gave name to this fine stream at the first settlement of the
country, is a plate of sandstone lying in place on the east bank, about a
mile above Van Gordon's bridge ( no longer standing ) where was a
natural exudation of petroleum. " Lytle explains that the " natural
exudation " or oil seep, was in Lawrence County about a mile and a half
north of Wurtemburg along the creek, and was the reason the area was
drilled originally for oil and gas. The Lawrence well, first commercial oil
well in the area, was drilled soon after the Drake Well. The oil field
discovered by Lawrence was named The Slippery Rock field.

SLIPPERY  ROCK  -  In the Lawrence County section of Slippery
Rock Creek, about a mile and a half north of Salvation Army's
Allegheny, the right bank shows the sector of bed dipping
toward the stream. This is the historic " Slippery Rock " from
which the creek, the town, the college and its football team
are believed to derive their common name.

" The evidence," Lytle says, " points to this plate of rock as being
described by Lesley and designated as The Slippery Rock.  The rock

is on  the John Eicholtz property, Mrs. Lytle's article concludes.
In can be  seen along the east bank of the creek from the Glasser
bridge, or from the west bank, looking across and downstream, from
the southern tip of Camp Allegheny, the Pittsburgh Salvation Army.
Most  --  and sometimes all of the rock is under water. All of its algae,
moss and mud -- covered - treacherous & beautiful in its rustic setting.

CIRCLE ON THE ROCK - On this 1874 Second Pennsylvania Geological
Survey map, based on an 1864 map prepared by J.P. Lesley, the " Slippery
Rock " is circled. Now, more than a century later, bends in the creek still
match those of the original map, according to Geoogist William S. Lytle
and his wife, Virginia, who visited site. The map was provided courtesy of
the Pennsylvania State Geologocal Services files, through arrangements
with Services files, through arrangements with W.S. Lytle.

The  Where  and  Why  of  Slippery  Rock

There really is a ' Slippery Rock ' - a certain rock in the Lawrence
County section of the creek, located about a mile and a half from
Wurtemburg, and just as slippery today as it was in 1864, when J.P.
Lesley labled it on his 1864 Pennsylvania Geological Survey map. 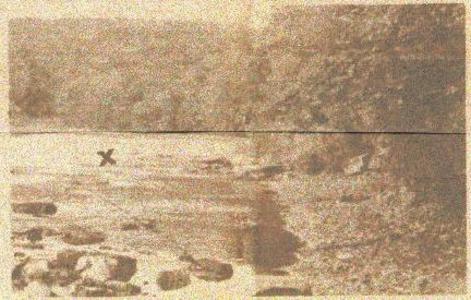