Linda McCandless recently sent us this

photo with the following information:

"This is my grandmother, Vivian 'Jean' Reigelman, age 11,

standing in the doorway of the Old Stone House when it

any farther because of rattlesnakes. I'm surprised she

went as far as she did-- she was terribly afraid of snakes!"

Thanks, Linda, for sharing this treasure from your family history!

By this time, the house had long ceased

to be a stagecoach tavern and was rented

as a residence and small farm.  The identity

of the people in the photo is unknown.

Slippery Rock University's Theater was
After ' Emma Guffey Miller ', who is believed
to be the Ghost that Haunts the place. There
is often strange banging or pounding noises
are heard and when people go to see what

" When you are sitting here in the dark and the quiet, you can hear footsteps upstairs," Ms. Melnick said, adding that the specter of a woman in Victorian dress has been seen in a second-floor room that displays items from the 1800s.

the noise is, no one is there. The lights also flicker and go out during rehearsals.  The
students started the tradition of ' Baby ' somewhere on the stage during performances
to keep ' Emma ' from sabotaging the show. 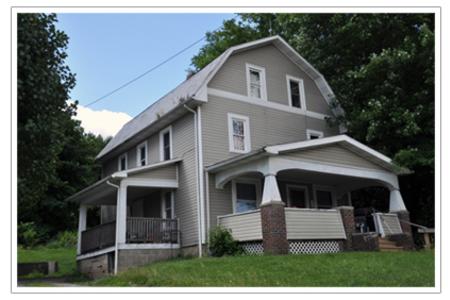 a lantern. Rumor is the man died because of a malfuntion in the equipment. Some nights if
you park your car right above the mill, the man can be seen walking down the hill.  He goes
into the mill and a light seems to be on and screams are heard coming from the mill.  There
is also the spirit of a caretaker, Mose Whorton, who lived on the property from the early
1930's until his death around 1960. Mose lived near the mill, in a cottage that no longer
stands, the only home he had known since he was 20 years old. Legend says that at the

old mill in the dead of night, a honk of a car horn will summon Mose.

some crossing the sidewalks over to the hall, and watching over people in their rooms as

they sleep.   Many people have also unexplainably had their doors open in the middle of

the night, despite them being locked. It is thought to be good luck if she watches over you. 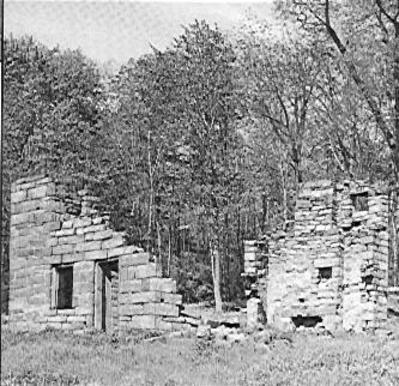 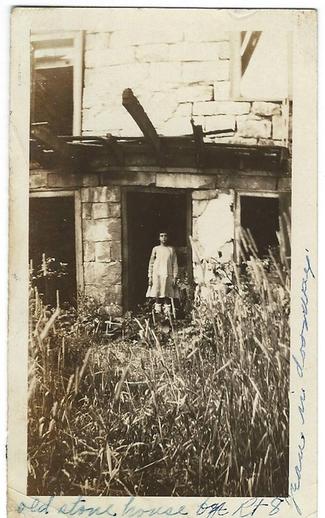 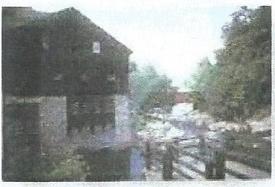 The old Mill turned state park is home to many spirits who still roam the hills and Slippery Rock Creek. When the mill was operational a man who worked there always walked the same path to work. He carried his lunch in a box and a lantern. Rumor is the man died because of a malfunction in the equipment. Some nights if you park your car right above the mill the man can be seen walking down the hill to mill. He goes into the mill a light seems to be on and screams are heard coming from the mill. There is also the spirit of a caretaker that lived on the property from the early 1930's until his death around 1960.

Times he can be seen chasing people away from the land he loved and took care of. Legend has it that a girl died in auto accident on the covered bridge that crosses Slippery Rock Creek beside the mill. Stories say she can be summoned by parking your car in the middle of the bridge turning off the engine and lights and honking your horn 3 times. She is supposed to appear in your rear view mirror. Natural human reaction is to turn around and look but she's never there and disappears from the mirror. Many people have lost their lives in the treacherous Slippery Rock Creek, which is more of a river in the surrounding area. Numerous adventurous young people have drowned in waters. Several people have perished climbing the park's huge rock formations. There is no doubt it one of the most haunted areas in Butler, Pennsylvania. 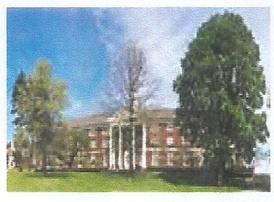 The old mill turned state park is home to
many spirits who still roam the hills & Slippery
Rock Creek. When the mill was operational, a
man who worked there always walked the same
path to work. He carried his lunch in a box and

Emma Guffey Miller, the ghost of Miller
Auditorium, was also said to have haunted
North Hall at night. She has been seen by

SLIPPERY ROCK, Pa. - Students, faculty members and others who claim to have seen or heard "Emma the Ghost" at Slippery Rock University will finally have an answer when someone asks them: "Who you gonna call?"
Baelfire Paranormal Investigation will spend the night Feb. 28 inside Miller Auditorium searching for the ghost of Emma, who is said to haunt the halls of the theatre and the University's North Hall residential building. The spirit is thought to embody Emma Guffey Miller, a prominent political figure, SRU trustee and University supporter who died in 1970.
"Hopefully, we'll see Emma. That's what we're looking for," said John Lewis, owner of the Titusville-based Baelfire group. "We want to communicate with her and find out why she's still there. Does she need helping moving on? Does she want to move on?"
A team of six investigators will use an electromagnetic field meter, infrared cameras and analog voice recorders in an attempt to "prove" the existence of Emma, he said. While many will dismiss the believability of ghosts regardless of the researchers' findings, Lewis said Baelfire will give SRU a certificate saying the theatre is haunted if they contact Emma.
"Infrared cameras can see far more than the human eye," he said. "We're hoping to catch an apparition, physical form or a primordial mist."
" Emma the Ghost " is one of those folklore stories that many colleges perpetuate, like the mystique of secret societies. Over the years, SRU students have reported seeing a woman's figure out of the corner of their eye, or hearing pounding noises from a cove, but finding nothing when they check on the disturbance. Other stories tell of lights flickering during rehearsals.
They speculate that Emma, described as friendly, haunts Miller because the building was named after her, and she loved theatre.
"Almost everyone is open to the possibility that Emma exists," Kelly McBane, a theater major from McKees Rocks, said. Many students who spend time in Miller have stories of feeling a presence, seeing a shape or hearing footsteps.
"You'll be standing on the stage and see something in the right corner, house left," she said. "Emma's a

good thing for us."
The Baelfire team will use a computer to analyze light, movement and things that go bump in the night,

Lewis said. They will rely on digital and 35mm cameras to document what they see.
They will certainly keep an eye on " Emma's Closet ," a back room inside Miller Auditorium that the theatre department uses to house clothes Miller donated before her death. Current theatre students use the wardrobe

for costumes.
From 3-4 a.m., the researchers will attempt a question and answer with Emma, Lewis said. In other investigations, Lewis said, "Spirits have shown their presence by ripping wind chimes off walls and throwing them to the floor, at times responding to commands."
"We've had some cases where you can play back a recording. Take out the background noise and you can actually hear a voice talking," Lewis said.
Baelfire, which is committed to the cause of proving that ghosts exist, has completed more than 40 investigations of alleged ghost sightings. Lewis said they find ghosts 20 percent of the time, he said.
"I personally have believed in them all my life," he said. "It excites me more than scares me."
While remaining neutral on the validity of supposed sightings, Rebecca Morrice, SRU assistant professor of theatre, recalled a spooky incident inside the theatre.
"I was in the main office area, alone in the building. I saw someone come up the stairs and I turned to talk to them and there was absolutely no one there, and no place that they could have gone," she said.
Ghost stories and superstitions are common in theaters, she added. For example, SRU theatre students have a tradition of placing a baby doll on the stage to prevent Emma from ruining a show. Some say the doll has deteriorated, with only the head remaining.
"When you're in a theatre building by yourself, it's really a pretty creepy thing," Morrice said. "It feels empty. Peoples' imaginations being what they are, you can hear things. But many people here will say there was definitely a time when you think you're alone, but you hear talking. You hear a conversation. It's not even random sounds. When you go to talk to them, there's no one there."
Students also report costumes mysteriously appearing in Emma's Closet.
"We'll be looking for a costume for a week before a show, and at the last check we'll find a costume at the bottom of the clothes which you would have seen a 100 times," said McBane. "There are a lot of little things like that."
David Skeele, SRU professor of theatre, said some students have been frightened by unexplained noises. "I walked in the Green Room to find students freaked out because of crashing going on inside a faculty member's locked office," he said.
Slippery Rock University is Pennsylvania's premier public residential university. Slippery Rock University provides students with a comprehensive learning experience that intentionally combines academic instruction with enhanced educational and learning opportunities that make a positive difference in their lives. 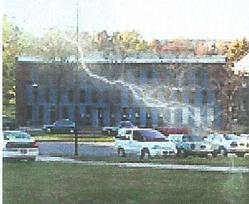 Baby ' started out as a whole baby doll, but has

degenerated to a charred multilated head. It is rumored that if ' baby ' is not present, the show will be a disaster. 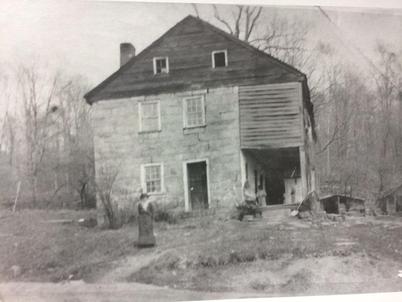 HAUNTED HOUSE: Fraternity brothers who lived in this house on Kiester Road said a ghost haunts the house. They named the spirit "Ted."

SLIPPERY ROCK, Pa. - Slippery Rock University is haunted. The culprit is the spirit of a man hanged near the former Alpha Sigma Phi fraternity house on Kiester Road more than 100 years ago. The phantom has caused "several violent things inside the fraternity."

That is, if you believe in ghost stories.

TRIAL OF MOHAWK. — The trial of SAMUEL MOHAWK, for the murder of the wife and five children of Mr. JAMES WIGTON, commenced in the Oyer and Terminer of this county on Wednesday the 13th, and resulted on Saturday in a verdict of guilty of murder in the first degree. A motion was immediately made by his counsel for a new trial. This motion will be argued, and, we presume, decided at our adjourned court on the third Monday in January next.  — Butler Herald