​(pl. mogi), skave. The teutonic words also originallycome from a root denoting " might 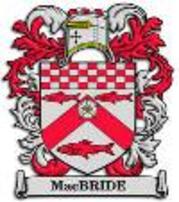 MAC BRIDE --  MacBride comes from the Irish Mac Giolla Bhride ' son of follower of
( St ) Bridget ; St Bridget was a famous abbess of Kildare, who died in 523.  Also derived
from the same Irish original are the surnames Kilbride, Gilbride, Macllvreed. NacGilbride

and others. The Principal Irish Family name was based in the north of County Dobegal in

Raymunterdoney, where they were very prominent in the church, a number of the family
becoming bishops.  A branch migrated in Co. Down in early times, where the surname
remains quite numerous.  In Ulster also, the namr may have a Scottish origin, from the
Scottish origin, from the decendants of Gillebride, progenitor of one branch of the Clan
Donald. The best known contempory bearer of the surname was Sean McBride (1904 -
1988), active on the Repulican side in the War of Independence and after, Minister for

External Affairs from 1948 - 1951, founder - member of the Amnesty International, winner

Surname ' McBride ' had at one time been ' Mac Bride '.  The date and place that this

surname change in spelling is unknown. Still they are proud Irish Surnames to bear
and have ben for centuries and the ages to come.