The Romans had an elaborate three name system that fell along with the Empire,
and by the fourth century AD there was nary a middle name to be found. Single
names worked as well as can be expected for the next hundred years. The practice
of attaching a word to help identify a man was resurrected in Venice and spread
first to France, then England, then Germany -- then to the rest of Europe. (Most
of Europe, anyway...) Today , those without a surname are the exception , and
Cher, Madonna, and Sting started out with a last name !

The chinese were the first to adopt surnames to honor their forebears, with the
family name placed first, rather than last. Thus, the family name of Sun Yat-sen
is Sun. Surnames that describe a man by his relatives are only one of several
categories of surnames.

When communities consisted of just a few people, surnames weren't so important.
But as each town acquired more & more Johns and Marys, the need was estab -
lished for a way to identify each from the other. The Romans had begun the
practice of using "given-name + clan-name + family name" about 300 B.C. In the
English - speaking part of the world, the exact date that surnames began to be
adopted can't be pinpointed. The Domesday Book compiled by William the
Conqueror required surnames, but hereditary surnames are not considered to
have been common place until the late 1200's.

About the year of our Lord 1000 ... surnames began to be taken up in France,
and in England about the time of the Conquest, or else a very little before,
under King Edward the Confessor, who was all Frenchified ... bu the French and
wee termed them Surnames, not because they are the names of the sire, or the
father, but because they are super added to Christian names as the Spanish
called them Renombres, as Renames.

Some surnames were derived from a man's Occupation (Carpenter, Taylor, Brewer,
Mason), this practice was commonplace by end of the 14th century. Place names
reflected a location of residence & were also commonly used ( Hill, Brook,Forrest,
Dale ) as a basis for the surname , for reasons that can be easily understood. 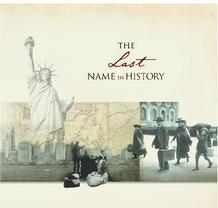 Did your grandparents have a middle name? If they

did, chances are their parents didn't. The three name

system that is fairly standard among the English

The  History  of  Last  Names

Some place names are a little cryptic, such as Chevrolet, the French place name
that means " little goat. " The name referred to the picture painted on the outdoor
sign at a roadside inn.  Pictures were used since few had reading skills, and in
that era, chevrolet referred to a place. Sometimes a man was easily distinguished
among his neighbors by a particular trait, or by some physical characteristic.
Nicknames that stuck became surnames -- some of which were so vicious, it is
surprising they lasted at all.  Many with names vulgar or scurrilous connotations
were eventually changed by altering the spelling, or just dropped outright in favor
of a more acceptable moniker. About one-third of all US surnames are Patronymic
in origin, and identified the first bearer of the name by his father ( or grandfather in
the case of some Irish names ).  Acquired Ornamental names were simply made
up, & had no identification, generally much later than most surnames were adopted.

There are other sources as well, but most can be wedged into one of the
above categories -- one way or another.

When surnames were being adopted, many were the result of nicknames
that were given by friends, relatives, or others. Some nicknames were extremely
unflatterring --- to the point of vulgarity --- but most of those have vanished ,
having been changed by descendants through spelling changes or simply by
changing names after emigrating.
Physical features that were prominant when surnames began to be adopted
were also borrowed as an identifier (Long, Short, Beardsly, Stout) as were dispo-
sitions of the bearers (Gay, Moody, Sterne, Wise). Sometimes the name told its
own story (Lackland, Freeholder, Goodpasture, Upthegrove) and sometimes
they might be selected to elicit envy or sympathy (Rich, Poor, Wise, Armstrong).

Names that identify the father are termed Patroymic surnames. Rarely, the
name of the mother contrinuted the surname, which is referred to as Matronymic
origin.  The Scandinavians added "Son" to identify John's son or Erik's son. The
German-French used the prefix "Fitz" to mean child of , as in Fitzpatrick , child of
Patrick. Many other cultures had their own prefixes to indicate the father ('s name),
including the Scots ('Mac Donald), Irish ('O'Brien), Dutch ('Van' Buren) , the French
('de'Gaulle), Germans ('Von'berger) Spanish/Italian ('Di' Tello) & the Arab-speaking
nations ('ibn'-Saud). Sometimes the prefixes were attached to places rather than
the father's name, such as traditional family land holdings or estates.

Some names were simply added when those without a surname suddenly
needed one.  A lady - in - waititng for royalty might have had no traditional
surname, but would require one if no longer in the service of royalty. In times
of political turmoil, a deposed ruler might require a smaller staff, and long-time
servants would find themselves among commoners -- and suddenly in need of
a surname. Names were sometimes invented as combinations of other words.

Among the most common names are those specialty crafts & trades that
were common during medievil times. The Miller was essential for making flour
from grain. The Sawyer cut timber into workable lengths , with which the
Carpenter could make specialty items for villagers. Some names were a reflec-
tion of the place of employment rather than the job itself -- the name Abbott
generally refers to the man who was in the employ of the abbey as a servant
or other worker ; the man named Bishop more likely worked at the house of the
Bishop rather than holding the position. Osme names were taken as titles that
were originally less occupational, such as Mayor. Some surname occupations
are no longer in existence but were enough to identify a man in medievil days.

The widely found category is that which contains surnames derived from a place
easily recognizable when surnames were adopted. When men left their homeland
and moved to another country, he was distinguished from his neighbors by the
identity of his homeland -- Walsh hailed from Wales, Norman was from Noemandy,
Norris was Norwegian. Some men were from cities well-enough known that the city
was the distinguishing reference as in Paris . Towns were used in the same
same fashion , as were major rivers and geographic features . Less obvious now
now are those names which identified a man by the location of his house. John
Atwood lived at the woods, but exactly which one has long since been lost. Other
names can be traced to the exact locale where the first to bear the name kept his
residencs. As with the Patronymic designators, languages varied in the way a
place was denoted, as in Dutch name Van Gelder (from the country Gelder). The
Germans used Von as French used de or De, & both often reflected aristocracy.

Sources include but are not limited to: American Surnames by Elsdon C. Smith, Baltimore,
1969; A Dictionary of Surnames, by Patrick Hamks and Flavia Hodges, New York, 1994;
Family Names: How Our Surnames Came To America, by J.N. Hook, New York, 1982.