Today, a surname, which is also known as a family name and last name, is a hereditary fixed name that you share with your family members.

The use of a surname was originally adopted in order to distinguish two individuals with the same first name, and, at first, these last names were not passed down to the next generation.

In Europe, the first surnames were first used about eight hundred years ago. People developed individual surnames which, over time, became names that were passed down from generation to generation.

Surnames usually originated from one of the five following sources: (although the same surname may have multiple meanings from different sources in different places) 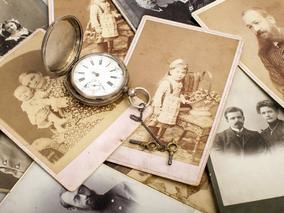 "What does my surname mean?" If you have ever asked this question and wondered about the origin of your last name, you will find your surname may answer one of the questions of where your ancestors lived, or what they did for a living, or what was their personality like, or how they looked many hundreds of years ago.

Until the last hundred years or so when the spelling of a surname became standardized, the same person's surname could be spelled differently from record to record. Before the 19th century, when many people were illiterate, the names on records were written by clerks and priests the way they heard the name pronounced. This lead to different spellings for the same name. Spelling continued to change and evolve until the beginning of the 20th century when it became fixed - in large part due to the standardization required by the Social Security Administration in the United States. So as you are looking for your surname history, you may consider researching possible spelling variations. Don't assume your surname was always spelled the way it is spelled today.

From the first name of father used with either a suffix or prefix (which differ from country to country) to identify the person as "son of"
Examples:

From living near a place or landmark.

From the person's occupation.

From a distinguishing and sometimes unflattering nickname describing the person's looks or personality.

From an ornamental or decorative word - a name that simply looks and sounds nice that may describe a natural feature. These surnames were simply acquired when a person without a surname needed one.

Some surname origins are uniquely created.

Scandinavian countries, at first, used non-inheritable patronymic names. Each succeeding generation would have a different last name based on his (or her) father's first name. Because of this tradition, Scandinavian countries became standardized surnames much later than other European names. It was only about 100 years ago that people of Scandanavia began to inherit their father's surname.

Spanish countries traditionally use two surnames. Generally the first surname is from the father and the second is from the mother.

Polish countries have gender specific surname endings. If a wife takes a husband's surname which ends in -ski, her new surname will end in -ska.