The city of Franklin was selected as the county seat

site of Fort Franklin, which was built in 1787 & named

after Dr. Benjamin Franklin. The town was incorporated
as a borough in April 1828 and chartered as a city on

River, was settled in 1825 and remained a small village

until 1860 when the town's oil wells were developed.

of residents killed when burning oil rushed down Oil

Creek from Titusville.  Damage was estimated at over

The county of Venango, located in the northwestern part of Pennsylvania, was created on

March 12, 1800 from parts of Allegheny and Lycoming Counties and was attached to Crawford

County until 1805. The name Venango is an Indian term meaning French Creek.
In 1839,  part of the county became Clarion County  (some Clarion records from 1800-1839

County in 1848.
Venango County is bordered on the north by Crawford and Warren Counties, on the east

by Forest and Clarion Counties, on the south by Butler County & on the west by Mercer County. 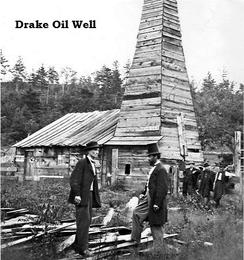 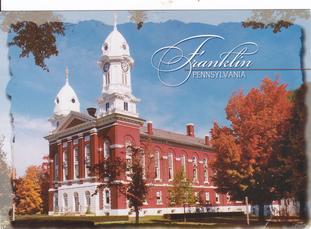 exerpt from your Family Tree, 1958

in the U.S. state of Pennsylvania, the success of which sparked the first oil boom in the

United States. The well is the centerpiece of the Drake Well Museum located 3 miles (5 km) south of Titusville.

Drilled by Edwin Drake in 1859, along the banks of Oil Creek, it is the first commercial oil

The Drake Well is often referred to as the first commercial oil well, although that title is also claimed for wells in Azerbaijan, Ontario, West Virginia, and Poland, among others. However, before the Drake Well, oil-producing wells in the United States were wells that were drilled

for salt brine, and produced oil and gas only as accidental byproducts. An intended drinking

water well at Oil Springs, Ontario found oil in 1858, a year before the Drake Well, but it had

not been drilled for oil. Historians have noted that the importance of the Drake Well was not

The importance of the Drake Well was in the fact that it caused prompt additional drilling,

Among the first settlers at Franklin were George Powers, William Connally, Col. McDowell,

permanence). They also used the oil as part of their religious ceremonies. 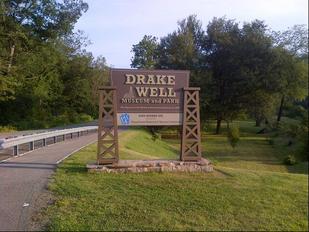 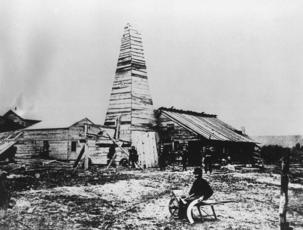