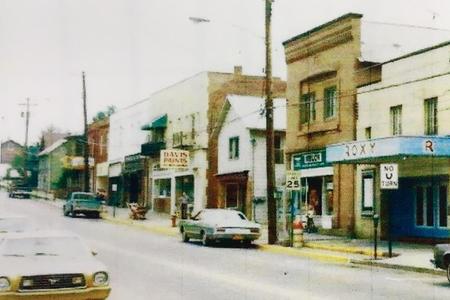 Centerville was sebsequently selected by the committee organized to
find a name for the town and community remained Centerville until 1900.
The name itself was descriptive - the Borough is located approximately
halfway between Butler and Mercer on what was the Butler - Mercer Pike.
The first Post Office for the newly settled area was established at Mt.
Etna ( later Daugherty's Bridge or Mill ), the pioneer village in the township,
on Slippery Rock Creek in 1824.  The Post Office was named Slippery Rock
and Issac Pearson was appointed Postmaster. At present, Shawnee Acres
tourist home, built 1812, occupies the site which is located two and a half
miles south of Slippery Rock Borough on route 173. In 1826 the Slippery Rock
Post Office was moved to Centerville where the original name was retained.
According to legend, the postmaster loaded the Post Office into a wheel -
borrow and moved it.  It took two or three months afterward before the
Government discovered the change in location.
In 1900 the name of the community was changed to Slippery Rock, to
correspond to the Post Office. Interestingly there is only one " Slippery
Rock " in all the United States.
After the Butler  -  Mercer Pike was completed in 1822,  the first lots
in the community were laid out on land owned by Stephen Cooper and
William Hill. Records reveal that when the town was founded in 1825, the
population included Stephen Cooper, William Hill, John Retnold, a tavern
keeper, William Cross, an innkeeper, & Isaac Pearson, the first postmaster
and a merchant.
At the beginning of the War, 35 years after the founding of Slippery Rock,
the population had increased to between 300 and 400. Among the business
in town were two general stores, two taverns, two blacksmith shops, a
foundry started in 1834 making stoves and cast iron plows ( the plows sold
for $ 25 ),  a tannery,  and a fancy weaver.  Two woolen mills which wove
blankets were also in the area. The community also boasted of a crockmaker,
two shoemakers, a livery, two doctors, an undertaker and a carpenter.
Like many small communities, Slippery Rock became virtually self - sufficient.
The sesquicentennial observance in Slippery Rock will resume Oct 8 with a
full slate of activities scheduled through Oct 12.

Legends  Abound  Over  Origin  Of  Name  Of 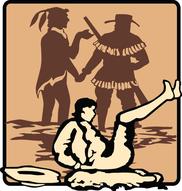 Our   Ancestors  Immigrated  into   the  United   States

history - shows an Indian slipping off a  rock in a creek.  The trademark of a local

bank similary depicts a frontierman slipping off a rock. The community celebrating
its 105th birthday this year and the idea of an historic but undetermined "someone"

slipping off a rock in a creek are inexoraby related.

LEGENDS  OF  THE  ROCK

Legends abound regarding the naming of the creek which flows in a
generally westward direction through what is now Slippery Rock Township.
One story has it that the creek was named during the French and Indian War.
As a British Colonial led his forces down an Indian trail, across the creek, a
horse fell on a large smooth rock, severely injuring the rider. The soldiers
in the party then christened the stream " SLIPPERY ROCK ".
Another tale attributed the naming of the creek to the Delaware Indians
who called the stream " Weschachachapehka " - - - " SLIPPERY ROCK ".
However, according to William Ralston's Early History Along the SLIPPERY
ROCK, the name of the stream is derived from the fact that before the advent
of the coal mines, the water had a peculiar quality. It had many stone riffles
and rocks in its bed in the middle course and these rocks had the quality of
collecting slime. Some would hold an inch of it and ' sloping ice or soap was
as slippery.
By the time the first settlers arrived, the creek was known as " SLIPPERY
ROCK ". The area surrounding the stream became  Slippery Rock Township.
Slippery Rock Township is one of the four original Townships in Butler County.
FIRST  GINGER  HILL
As the village in the northern most part of the township grew, there was
a considerable controversy as to what it should be called. The settlement
was known to its original residents as " GINGER HILL " - - - a name apparently
derived from a local Tavern Keeper's practice of giving out plenty of GINGER
with whiskey he sold (or selling the GINGER and giving away the whiskey).